You are here: Home1 / Somalia EN

Support for a family from Somalia
Current donation project: Somalia

Mara*, a woman from Somalia who is now 35 years old, set off for Europe in 2014. Unusual for a young woman to be the first to flee her family – but Mara was threatened and feared for her life. Her mother asked her to leave and get to safety; relatives paid for the escape. Her sons Keynan and Ismail, now 13 and 9 years old, had to leave her with her grandmother and her second husband Hanad. The father of Keynan and Ismail has died and Mara is married to Hanad in second marriage. When she fled, she was pregnant with her third child. Her escape led her via Ethiopia and Sudan to Libya, then by boat to Italy. The boat she fled on was in distress. The fugitives were taken up by a rescue boat, but some people died on the journey. From Italy Mara travelled on to Germany, where little Abdi was born in January 2015. 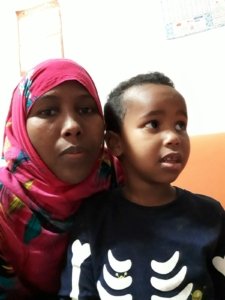 In the meantime Mara’s asylum procedure has been completed, she is recognised as a refugee and has the right to join her family. Her husband and their two children have been waiting for this news in Somalia since 2014. But the conditions in Somalia have deteriorated, the situation is very uncertain, especially for children. Many are kidnapped by rebels and recruited as child soldiers. Some children are kidnapped and sent to houses as messengers with parcels. As soon as the child is in the building with the parcel, the bomb hidden in the parcel is activated by remote detonator.

In 2018 the son of a close relative of Mara died in this way. Hanad therefore decided to flee to Kenya with the boys. In Nairobi, where they had to apply for visas, the three have now rented a room. They are waiting for their visas to be issued so that they can travel to Germany. But according to their lawyer, this could take until the end of 2020.

Hanad is not allowed to work, he is dependent on support. Mara herself gives everything she can spare. For visas and tickets to Nairobi, the first rent, basic furnishings and living expenses, she has sent her husband all her savings and has also borrowed money from friends. To be able to live in Nairobi, Hanad, Keynan and Ismail need monthly support and need additional costs for papers, the lawyer etc.

The Stuttgart Neckarpark Circle of Friends, which looks after Mara and Abdi, asks for support from the family.

just human supports the family since December 2018 with donations for rent and food. In all funding decisions, just human is advised by country representatives who come from the respective country or have lived there for a long time. Our country representatives for Kenya have confirmed that for three people 300 € per month is enough for a life in Nairobi. Because Hanad initially only found very expensive and cramped accommodation in Nairobi, our Kenya representatives also gave him tips for finding accommodation. Hanad, Keynan and Ismail found a cheaper and larger apartment and were able to get by with less support.

just human has promised a one-time support of 400 € (for the first higher rent) and then 300 € for initially 4 months. Thanks to many donations the support could then be extended until December 2019. In order to be able to support the family in 2020 in the expected 10 to 12 months until the visa is granted, we are dependent on further donations.
Please help to support Mara’s family in Kenya! Donations for the project “Somalia” will be forwarded 100% to the family in Nairobi.

Help for people on the run

We support people who are forced to flee from war, violence, political or personal persecution, exploitation or economic hardship. The aim of our support is to ensure that all people can live in safety. This includes the possibility of satisfying basic needs, maintaining contact with family and friends* as well as access to health care, psychosocial assistance, school, training and job opportunities. To this end, we provide support, for example, in achieving a safe place to live, in earning a living during the persecution or flight phase, in arranging and/or financing legal advice, health and psychosocial assistance. Support can also be given to measures for school or vocational training and professional independence.

Support is given to individuals in war and crisis regions, on the run and in countries of refuge, as well as to projects that promote the aims of just human.